Every country on the planet has an organisation or occasionally more than one agency that oversees the web domain registrations within its borders. The protocols or decision-making processes of these organisations are continuously placed under scrutiny in order to maintain their positions as the country’s manager of web domains. Incidents of organisations having their carpets pulled out from under their feet is also not uncommon if their management is less than desirable or they are found to be mismanaging or incompetent.

This seems to be the case in Australia following the release of almost 30 odd recommendations by the federal government based on their investigation into the spectrum of Australian web addresses and how they will be managed in the near which placed the current domain registry authority in Australia (auDA) under the spotlight. The controversy surrounding their “au” domain name rollout for the second half of this year was the reason behind the chair prompting the domain registration authority auDA to inform members of their organisation that the board will no longer be assuming consultation on the subject matter.

The issues and conflicts that has been hovering over the auDA’s consultation process especially for smaller scale businesses is believed to have the potential to cause havoc for their businesses and brands if they were compelled to stake a claims on new website domains.

The main concern for these businesses was that the “.au” domain addresses would force a significant number of firms to participate in contests in order to claim their equivalent “.au” address which would naturally have an impact on search engine optimisation efforts related to their brands. Apart from that, from a higher perspective, the auDA have not justified as to why there is a need for Australian businesses to have new web addresses in the first place.

The new recommendations is expected to bring about much desired changes and in line with the recommendations auDA has complied and welcomed the proposed recommendations and the process of implementing them have begun. More than 3 million.au domain names have made the transition towards the new infrastructure under Afilias Australia which is based in Ireland and chosen by (auDA) in December for following a global tender process.

The move is expected to enhance the entire system which was constructed by Neustar over their 15 year reign and Afilias modern registry mechanics is expected to meet the requirements of Australia’s rapidly rising digital economy.

Neustar, that acquired the AusRegistry, has stood firm as the back-end provider for .au since 2002 and ended in July 2018 replaced by Afilias that was chosen from 3 shortlisted candidates from a pool of nine bidders. It was reported that the contract was set for bidding in May only after auDA and Neustar were not able to come to terms with the proposed renewal.

From a financial perspective based on the deal it can be expected that.au registrars will see a price drop which could potentially lower prices for registrants who currently pay AUD 17.50 ($13.44) per domain for a 2 year term with Neustar’s raking in approximately $5 (USD) each year. 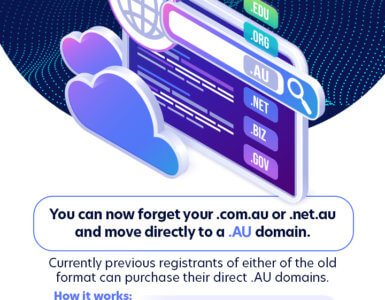 Domain names make a world of difference towards attracting web traffic and given the fact that domain name purchases run on a first come basis concept, it not always easy to get the name you want. More often than not...